I use my Chusi Cushion pattern to relax with. And when I first started it I was going to make a cushion with my squares. I sat down with one ball in three shades and cast on.
I love sharing the joy of simple patterns with knitters, the kind that make you feel good as you knit them. So what happened with the Chusi cushion squares? They turned into a Chusi Blanket! After the first three balls were knitted up and sew together I realised I missed knitting these squares, so I got three more balls and when I finished knitting them, I then three more after that….and even though I’ve sewn it up now I *will* be adding to it!

The Chusi Cushion Blanket uses three different shades. However, as you can see I didn’t stripe all the squares like it says in the pattern, I worked some as blocks of solid shades.

My blanket took three balls each of three different shades so a total of nine balls.

This made six squares of each solid colour and seven striped squares, which I then sewed together to make into a blanket that measures about 78cm x 82cm.

It’s a three at a time project that I will do in between designing and knitting garments. It’s a project that has no time limit, it will be done when it’s done. It’s my refresher blanket. And maybe I’ll change the shades on it, perhaps the middle will be these shades and I’ll do other shades around the edges but for now I’ll get three more of these shades and knit some more squares.

This is what I suggest to new knitters too. You can buy three balls to start you off so you don’t feel overwhelmed and can relax and enjoy the yarn and the stitch. Then these three balls can turn into a cushion or if you get addicted, the beginner (who will not be a beginner by now but a garter stitch lover!) can get six more balls to complete a blanket….and then after that maybe three more balls…

And if you were wondering what the original looked like, here it is….. 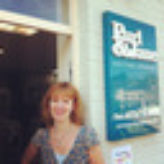 Free UK Delivery on all orders over £45! Shop Now

This website uses cookies to improve your experience while you navigate through the website. Out of these cookies, the cookies that are categorized as necessary are stored on your browser as they are essential for the working of basic functionalities of the website. We also use third-party cookies that help us analyze and understand how you use this website. These cookies will be stored in your browser only with your consent. You also have the option to opt-out of these cookies. But opting out of some of these cookies may have an effect on your browsing experience.
Necessary Always Enabled
Necessary cookies are absolutely essential for the website to function properly. This category only includes cookies that ensures basic functionalities and security features of the website. These cookies do not store any personal information.
Non-necessary
Any cookies that may not be particularly necessary for the website to function and is used specifically to collect user personal data via analytics, ads, other embedded contents are termed as non-necessary cookies. It is mandatory to procure user consent prior to running these cookies on your website.
SAVE & ACCEPT